Baounah 2nd (June 9): The Discovery of the Relics of St John the Baptist and the Prophet Elisha at the Monastery of St Macarius 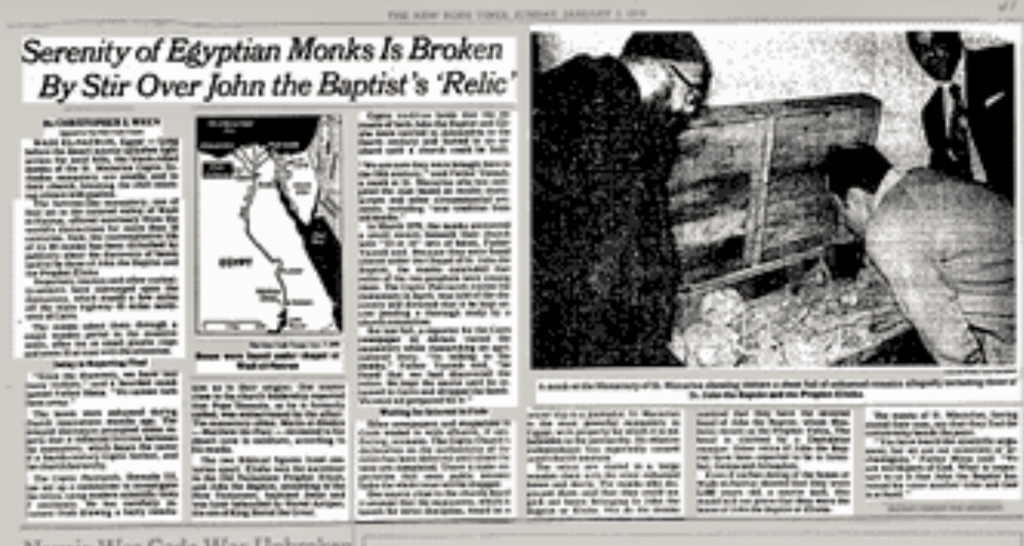 The New York Times of Jan 7, 1979, tells the story of the great discovery at St Macarius Monastery, along with a photo of the box where the saints’ relics were temporarily stored until a small shrine was built for them in the main church..

It was in August of 1976, during a restoration of the ancient main church at the Monastery of St Macarius, that an incredible discovery was made in a forgotten, sealed oﬀ room underneath the ﬂoor. It was several skeletal remains of saints which had long ago been carefully laid out for burial within the church. And among these remains of several saints, were the the relics – the bones – of St John the Baptist, and the Prophet Elisha.

Let’s go back a few thousand years. Elisha the Prophet, whose story was in the Old Testament Book of Kings, was the disciple and successor to the Prophet Elijah over 800 years before Christ. And of course, John the Baptist is the one who baptized Jesus Christ, and was later imprisoned and beheaded by King Herod Antipas in Jerusalem. It is said that in 4th century AD, Julian the Apostate, Emperor of the Roman Empire, ordered that the relics of both John the Baptist and Elisha the Prophet to be burned, but some Christians took both sets of remains and smuggled them away, and Coptic writings from the 11th and 16th centuries found at St Macarius Monastery recorded that the remains of both John the Baptist and the Prophet Elisha had been brought to Alexandria, Egypt in the ﬁfth

century (Alexandria was one of the major cities of the Roman Empire, and later, the Byzantine Empire) and were temporarily put into the main cathedral of St Mark in Alexandria until a church could be built into which they could be properly placed. For a while, the relics were in an Alexandrian church named for st Athanasius, but then In the 10th century the relics were transferred to the church at the monastery of St Macarius.

St Macarius Monastery, one of the earliest Christian monasteries, was founded in the 4th century by the monk St Macarius the Great in the northern Scetis Desert of Egypt, and many of the churches and other buildings there now are very ancient, and need occasional restoration and renovations. In the 1970s, the main church of St Macarius Monastery was undergoing a major renovation, and in digging under a wall to even older chapels that had been covered over many centuries earlier, the skeletal remains of the saints was discovered. It was a shock -a joyful shock – to those at the monastery, and to the rest of the Coptic Church, and when the word got out a couple years later about the discovery, it was a shock to the rest of the world. Still, the ancient documents from the 11th and the 16th centuries found at the monastery had said that the remains of John the Baptist and of the Prophet Elisha were entombed within that church, and there they were.

According to an article by Thomas Lippmann in the Washington Post newspaper dated December 25, 1978, “Church ofﬁcials say one of the tasks was to excavate, down to the foundations, three ancient, adjoining chapels that dated back to an earlier renovation in the 7th century. Father Youhanna said manuscripts in the monastery had given a precise account of the site of John the Baptist’s tomb, and “our ﬁndings coincide with what was in the manuscripts, in site and depth and in the description of the columns over it.”

The bones were placed in a large wooden box in the church sanctuary until a proper shrine could be built, a beautiful shrine to house the relics of St John the Baptist and the Prophet Elisha. The head of St John had been kept and honored for many centuries at a mosque in Damascus Syria, and sure enough the remains of one of two skeletons found together was missing its skull.The ﬁnd was announced to the world two years after the discovery, the story ﬁrst appearing in the Egyptian newspaper Al-Ahram in November, 1978, and then around the world. And now the faithful can go and take a blessing from the relics of two great Biblical ﬁgures.

May the prayers of St John the Baptist and Elisha the Prophet be with us, and Glory be to God forever and ever. Amen. 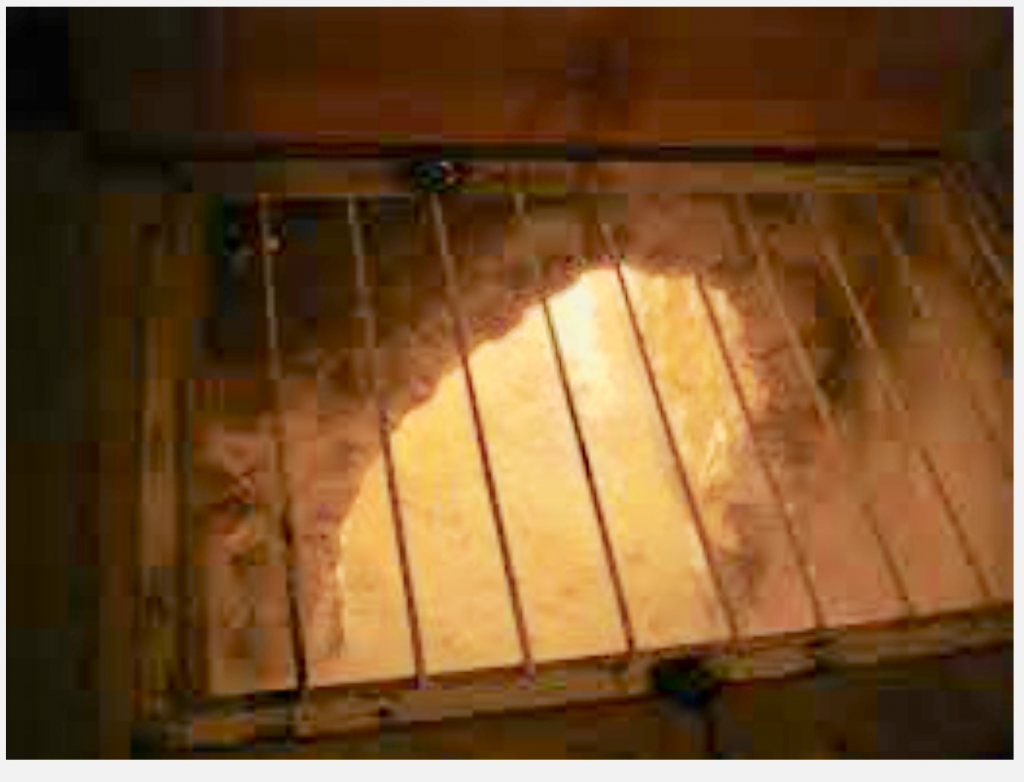 Above: Standing on the ﬂoor in the main church at St Macarius Monastery, one can look through a plexiglass-covered opening showing the ancient chapel below the ﬂoor this is where the relics were found.

To the left: The wall plaque in the main church identifying the relics above the shrine in which they are kept. 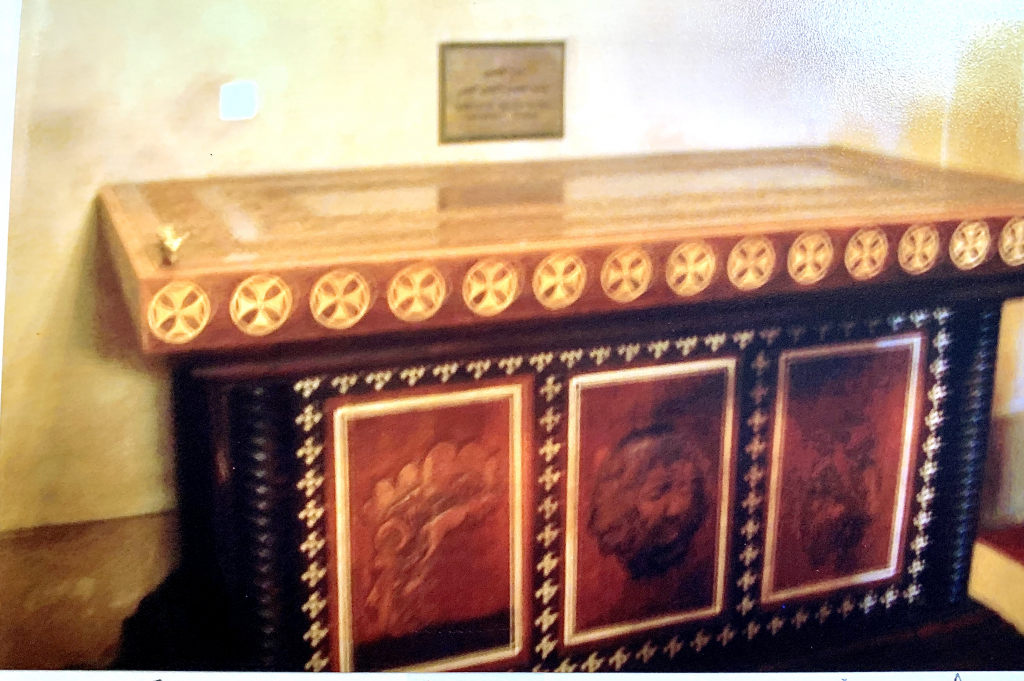 To the left: The reliquary shrine in the ancient Church of St Macarius where the relics are now kept.