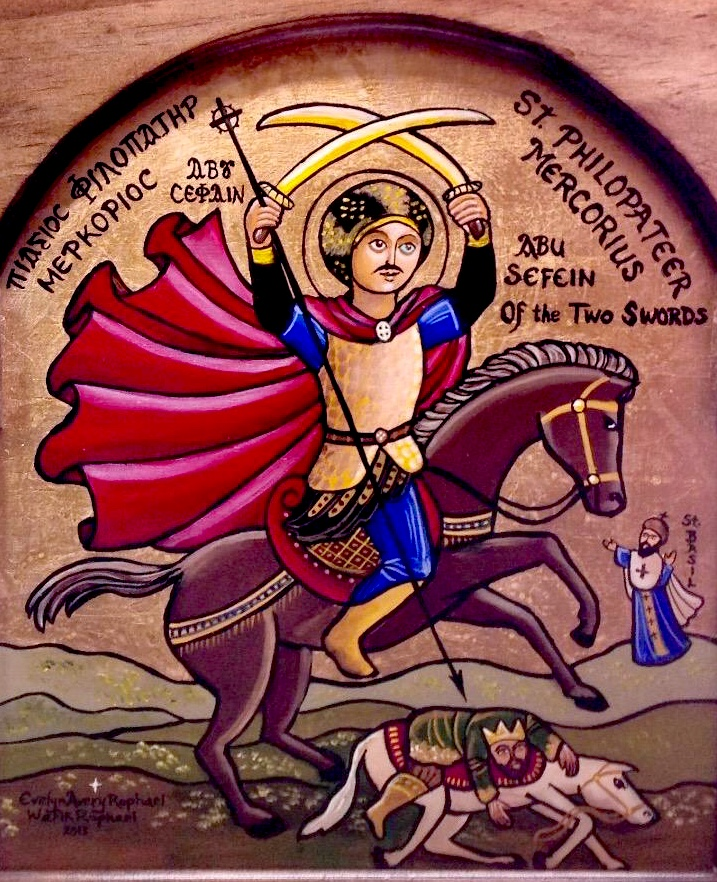 Saint Mercurius is an impressive ﬁgure in his icons, mounting on a horse, and holding two swords above his head. His story is an inspiration of courage, bravery, and faithfulness. He was born and raised a Christian, with the name Philopater, which is Greek for “Lover of the Father.” When he grew up, he entered the army, rising rapidly through the ranks, and took the name Mercurius. His leadership, courage and loyalty was admired by all, even the Roman Emperor. On the verge of a battle against an invading army of Berbers, Mercurius assured the emperor that the Roman army would win. Later that night, an angel of the Lord appeared to the saint, and presented him a shining sword of heavenly design. The angel told him the sword was from God, and it would lead him to victory in the battle against the Berbers. The angel also cautioned Mercurius that after the battle was won, to remember where this special sword had come from.

Sure enough, Mercurius led the Roman army to victory over the Berber army, and afterwards, the Roman Emperor held a large celebration, and requested Mercurius to join him in raising incense to the pagan gods. Mercurius declined, explaining he could only worship the One True God. The emperor insisted, and then demanded, and each time Mercurius refused to even pretend to worship the false gods … even to save his life. And so Mercurius was tortured, and martyred, rather than to deny Jesus Christ. St Philopater Mercurius is perhaps best known for his other name, “Abu Saifain,” which reﬂects the two swords of St Mercurius, one sword given by the army, and sword given by God. He holds both swords above his head in the icons of Abu Saifain, which means “Of the Two Swords.”

While the intercession of Abu Saifain is credited with several miracles over the centuries, there are two for which he is famous:

The ﬁrst one happened long ago, when St Basil the Great prayed in front of an icon of Abu Saifain, asking St Mercurius to intercede with God not to allow the Emperor Julian the Apostate to return home from battle only to continue persecuting the Christians. That night it was found that the ﬁgure of Abu Saifain had disappeared from the icon which depicted him. It returned to the icon the following day, the day that the emperor Julian died in battle. This event is now standard in icons of Abu Saifain: there is a fallen Emperor at the bottom of the icon, still on the horse which has also been stricken to the ground. And in the background there is St Basil, praising God for stopping Julian the Apostate from persecuting Christians.

The second famous miracle was only a few decades ago, when the Egyptian Defense Ministry seized an area of a property which rightfully belonged to the Monastery (for women) of St. Mercurius Abu Saifain, but as much as they tried through legal actions, the government continued to support the seizure of monastery property. The head of the convent was Mother Irini, a very holy and feisty woman who had felt close to St Mercurius ever since she had been a young girl, and had had many visions of him throughout her life.

After her last attempt had failed to reclaim the property of the monastery, Mother Irini went to bed in despair. But she was awakened by none other than Abu Saifain, mounted on his horse! The saint was in full military armor from ancient Roman times, and he pulled the abbess up on his horse, and then galloped oﬀ into the night. They ended up in a dark bedroom, and woke up the man sleeping in the bed. The lights were turned on, and Abu Saifain spoke to the shocked man, telling him that the Government needed to return the land to the nuns’ convent, and presented to the man some papers to sign. Then, as Abu Saifain was about to leave, he told the shaken man that he was to visit the monastery the next day. Mother Irini was returned to her room in her monastery, where she saw that the paper the man had signed was an order for the government to immediately return the property to the convent of St. Mercurius Abu Saifain, and it was signed by none other than Hosni Mubarak, the President of Egypt!

Mother Irini woke up the other nuns and told them what had happened, and after joyful thanksgiving, the nuns gave the convent a late-night cleaning. And thus Mother Irini welcomed the President of Egypt the next day to the convent, and the ownership of the disputed property was returned to the Monastery of St Mercurius Abu Saifain.

May the prayers of St Philopater Mercurius Abu Saifain be with us, and glory be to God forever and ever, amen. 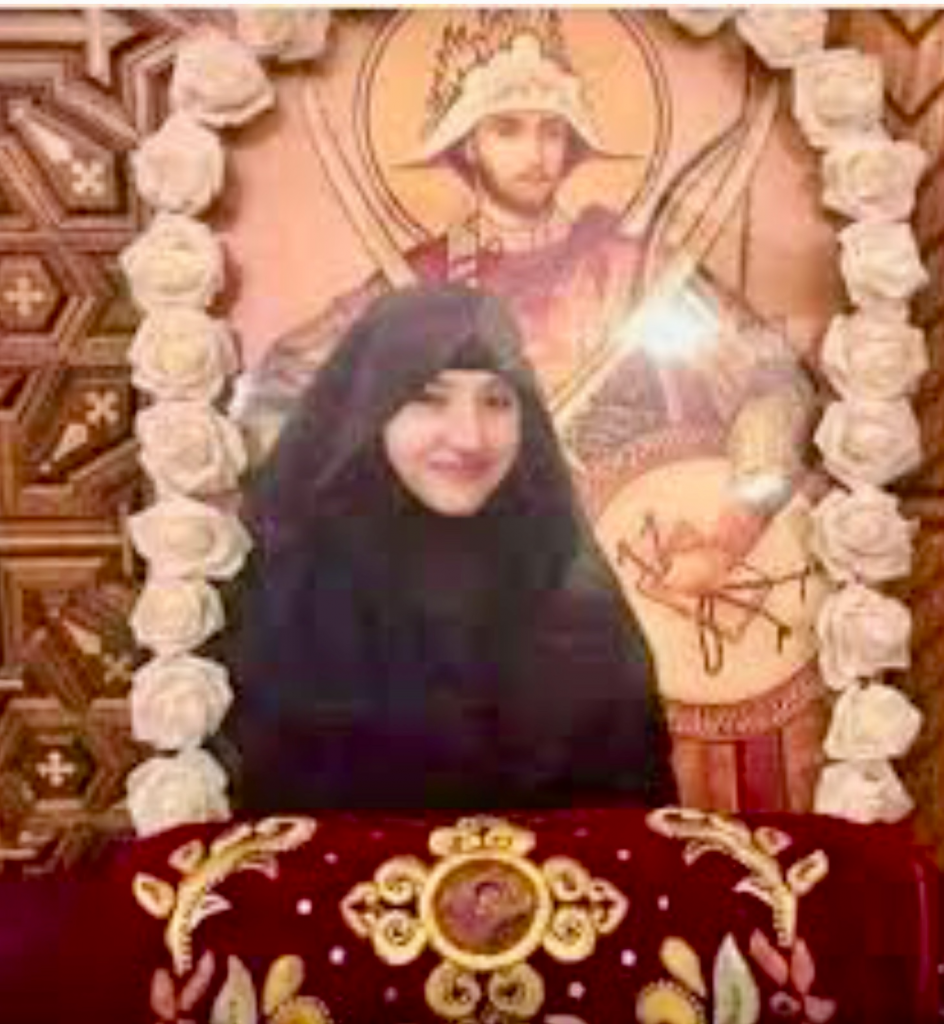 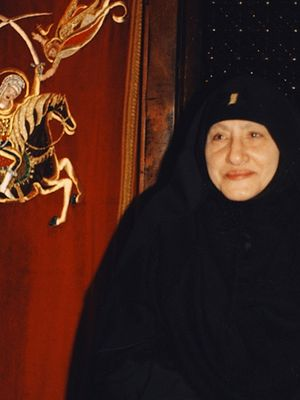