The commemoration of the martyrdom of the great St George is on the 23rd of Baramouda, which usually corresponds to the ﬁrst of May. His martyrdom occurred in 307 A.D. As the Coptic Synaxarium tells us, St. George was a young Christian man who went to the Emperor Diocletian, and was disappointed at how set against the Christians Diocletian had become. St George tried to reason with the Emperor, which only made Diocletian even angrier when the saint refused his command to turn away from his Christian beliefs. The Emperor commanded a series of tortures be inﬂicted on the saint until he renounced Jesus Christ, but God kept restoring St George to good health.

Emperor Diocletian persisted in ordering that more and more tortures be inﬂicted on St George until he renounced Christianity, and each time God saved George, more people came to believe in the Word of God, and they too became willing martyrs for the name of God.

Even while these tortures were inﬂicted on St George, the Emperor would taunt the saint demanding that he perform miracles, which God performed through St George. The saint even found the opportunity to convince Empress Alexandra, the wife of Diocletian, of Christianity. Finally, George said he would announce to a large crowd that he had turned away from Christ, but when Diocletian assembled the large crowd to witness his victory over St George, the saint instead cried out against the false gods carved from stone, and God caused the statues to be swallowed up by the Earth. Emperor Diocletian was enraged, and ordered that st George be beheaded. And thereby St George received the crown of martyrdom. His body was taken to his home in Lydda, and buried there. May his prayers be with us, and glory be to God forever and ever. Amen. 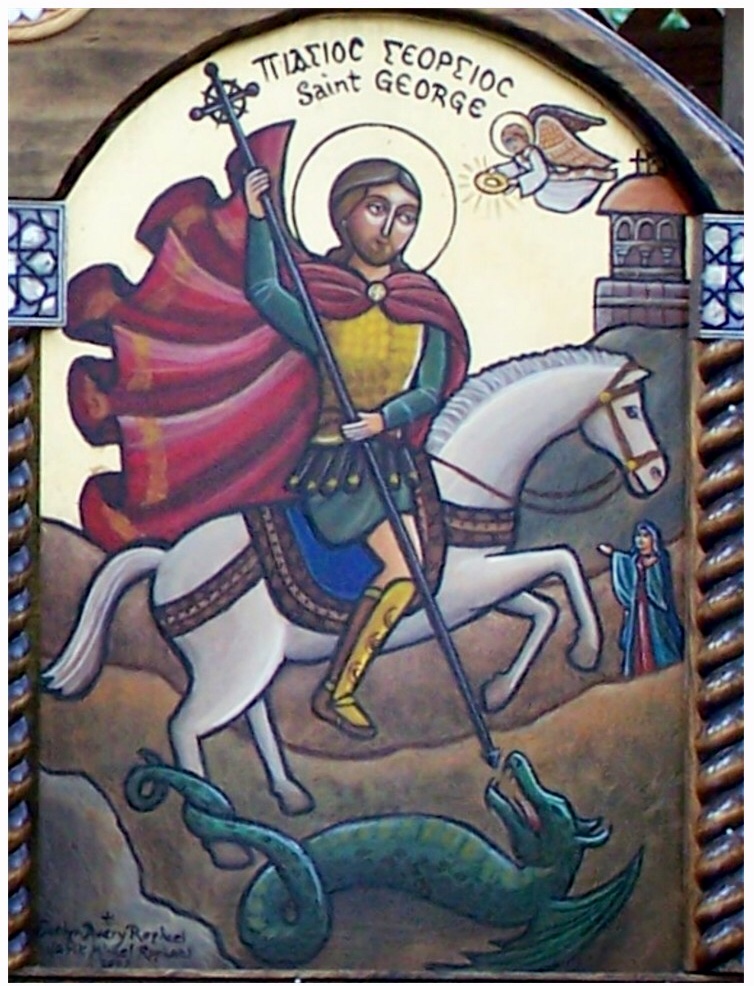 The icon of St George usually depicts him killing a dragon, which symbolizes him, with God’s help, defeating evil.

A Visit to the Original Tomb of St George in Lydda, Israel

Not only does it specify in the Coptic synaxarium that the remains of St George ere entombed in the city of Lydda (or Lod, depending on which language is used), but there are also many other historical references linking the burial of the great martyr to this ancient city.

The current Church of St George in Lydda was built in the 1800s, the most recent of a long line of previous churches stretching back almost two thousand years that were built and destroyed over the crypt of St George. The present church is Greek Orthodox, and astoundingly beautiful with icons of Jesus and the saints on nearly every available surface. Candles glow throughout the church, giving a feeling of eternal holiness. It was the day after one of the Feast Days of St George that we visited, and many icons of the great martyr were still displayed around the church.

We descended the stairs to down below the church, and we entered the rough stone crypt where the remains of St George, Prince of Martyrs, were ﬁrst buried many, many centuries ago. The room is lit by a few oil lamps, causing irregular shadows on the stone walls.The coﬃn which now holds the remains of the martyred saint is a beautiful carved marble sarcophagus with the eﬃgy of the saint carved into it, and “The Holy George” carved in Greek letters. The carved ﬁgure of St George is surrounded by a recess which is ﬁlled with Holy Oil, so that visitors may be anointed with it and perhaps ﬁll a small vial with it. There is a life sized antique mosaic of the soldier st George on the wall behind the marble casket, glimmering in the soft light cast by the oil lamps. While there are tiny fragments of the remains of St George located in churches around the world, it is overwhelming to think that this is where the saint himself was buried after his martyrdom.

A person who loves the saint and loves history will feel swept away here in the presence of the great saint’s physical remains that have stayed here for almost two millennia. There is a feeling of strength of spirit, of courage, of faithfulness and holiness in the air, and as one goes back up the stairs and leaves the church, there is a feeling of touching history, and touching holiness, and you leave Lydda a slightly diﬀerent person than when you ﬁrst arrived . 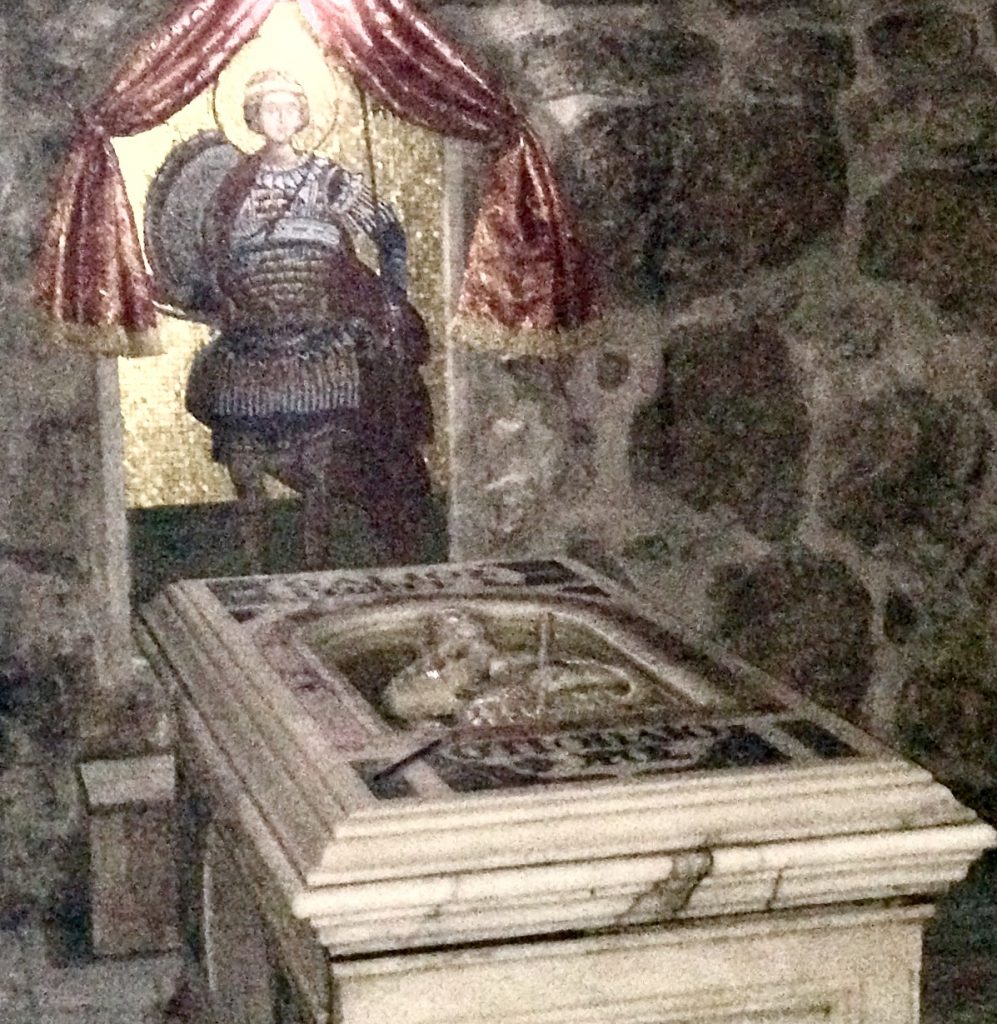 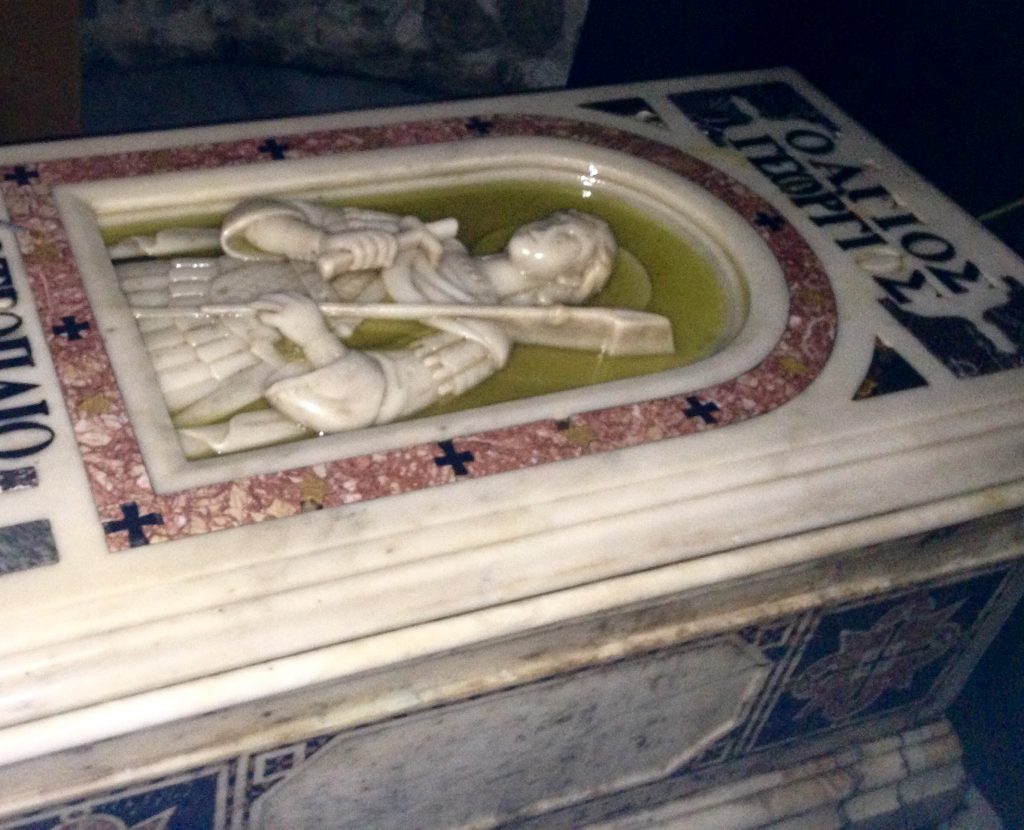