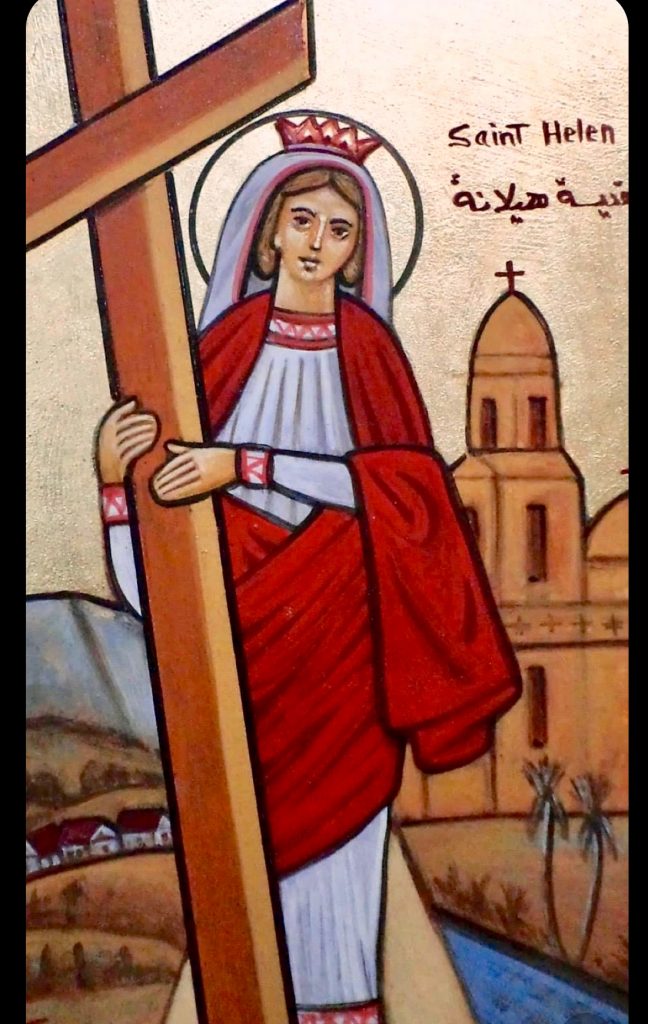 St. Helena the Empress made huge contributions to the spread of the new religion of Christianity. She began her life as an ordinary girl of humble Greek/Turkish origins in the mid 3rd century Roman Empire. It happened, by God’s will, that she met an ambitious, high-ranking soldier named Constantius, who was known to the Emperor Aurelian. Helena and Constantius married, and had a son around the year 272. They named him Constantine. Constantine was a teenager when his politically ambitious

father Constantius divorced Helena in order to marry the daughter of a co-emperor. But Helena and Constantine were maintained in a regal home, and Constantine stayed close to both his mother and father. Constantius eventually became co-emperor, and when he died, Constantine took his father’s place. He brought his mother Helena to come live with him and his own family in the royal court.

Up until the time of St Constantine, many of the Roman Emperors and co-emperors had viciously persecuted Christians, and yet the Word of the True God continued to spread throughout the Empire. Whether Helena was born to a Christian family and kept it secret, or whether she converted later in life, we don’t know. But what we do know is that she raised her son Constantine to not only accept Christianity and defend it against those who would try to destroy the faith, and that 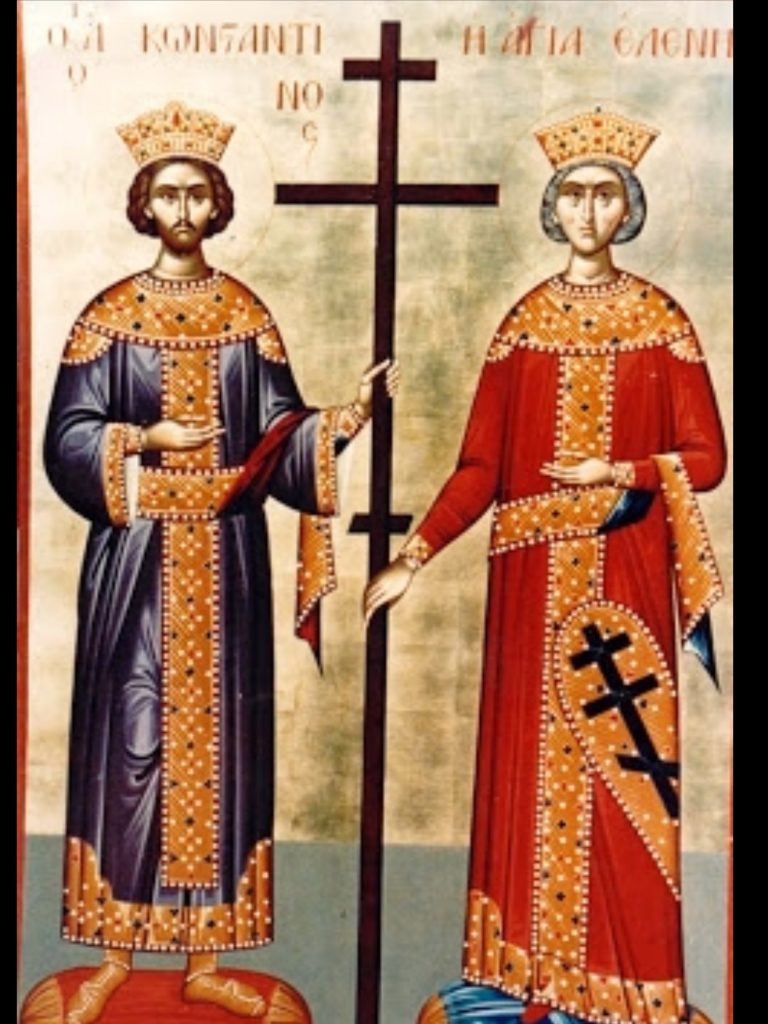 when he became sole emperor, he did declare it to be the official faith of the Roman Empire, and even participated in early church councils. Surely some of that came from her influence. And Helena was not only a devoted Christian, but she was driven to do more for the faith, to devote herself to Jesus Christ, and actually work for Christianity, and serve the church by, taking advantage of                   her position so that even though she was in her seventies, she set out on a pilgrimage to the Holy Land, and was led by God to find the places where Jesus was born, where he lived, where he preached, where he was crucified, and

where he resurrected from the tomb. She commanded that churches be built at these holy places, and Constantine was happy to fund the construction of these places of worship. King Constantine had funded the immense expedition with his mother Helena leading an entourage of soldiers, priests, bishops, architects, scholars and advisors. For two years Empress Helena explored the Holy Land, talking with elders about local traditions, studying, and going to where God led her. Some ancient sources credit her with the construction of hundreds of churches, some marking events in the life of Jesus, other churches marking places of martyrdoms of Christian saints. When we in modern times go to Jerusalem to see the Holy places, we can thank St Helena for her pilgrimage where God led her to find and mark these holy places, and also for being such an influence on her son who grew up to become emperor, and to embrace Christianity in such a way that it changed the world.

May her prayers be for us, and glory be to God forever an ever. Amen.

Queen Helena is Credited with Establishing Hundreds of Churches in the Holy Land.

Among them are the following, all of which have been restored or rebuilt over the centuries, some of which still have some of the original structure incorporated into its current structure. 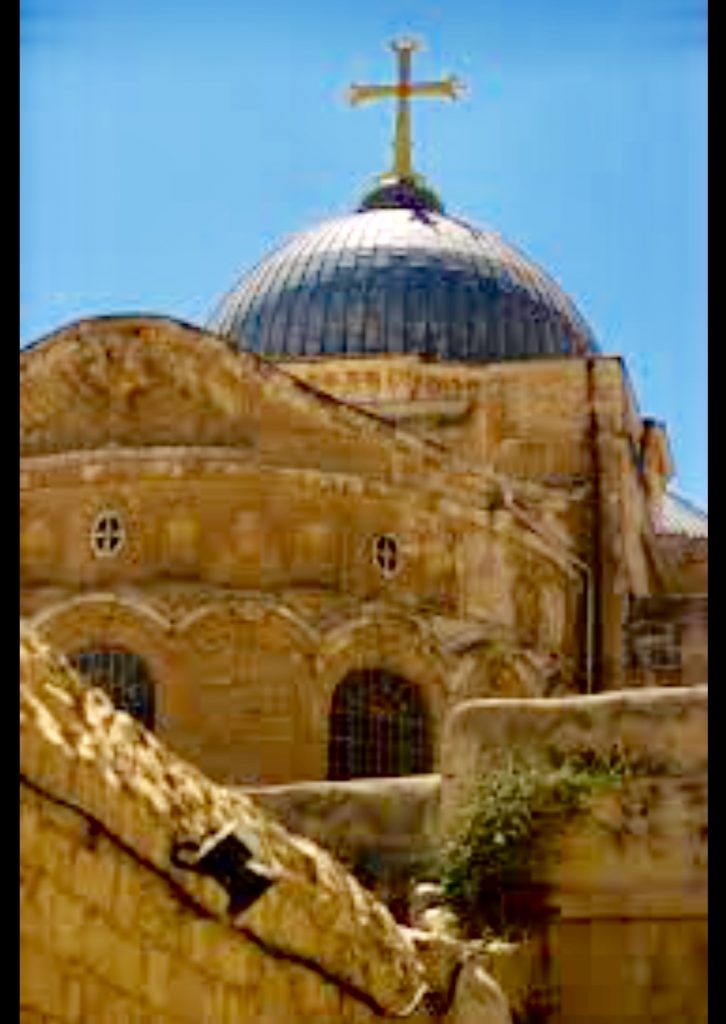 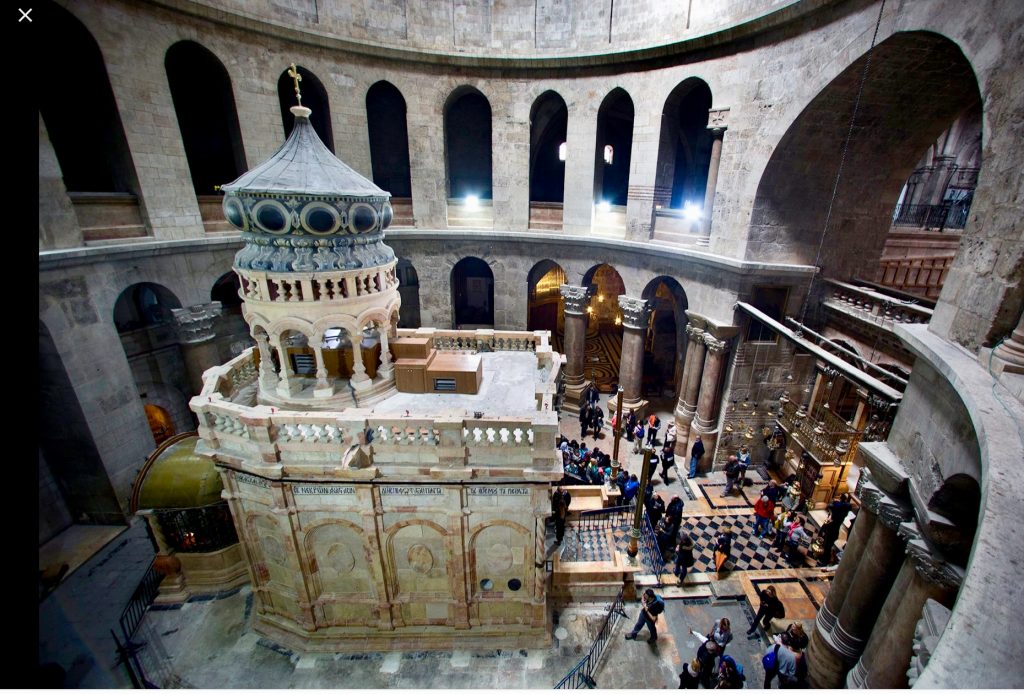 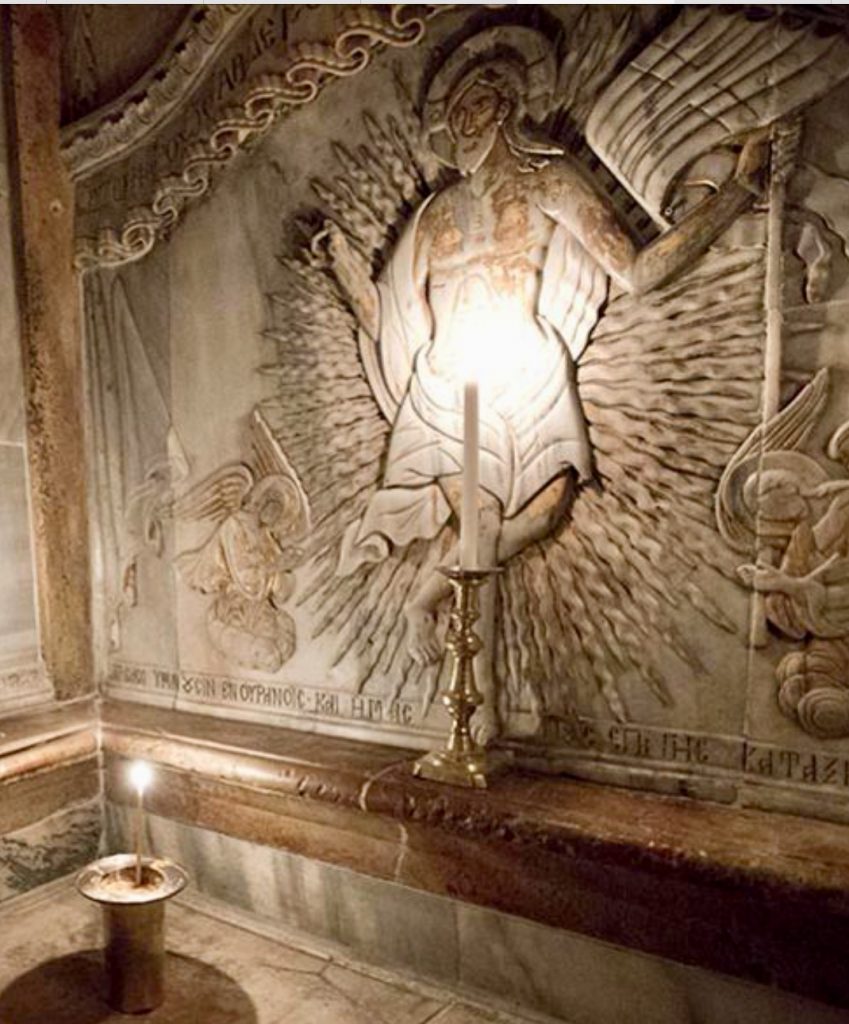 The Church of the Holy Resurrection, Jerusalem, marking where Jesus was crucified, buried, and arose. The small edicule structure, right, which was built around the tomb of Christ, was determined to have ancient slabs of marble laid during the time shortly after the death of St Constantine. At last, the carved marble wall above the tomb shows the resurrected Christ in glory. 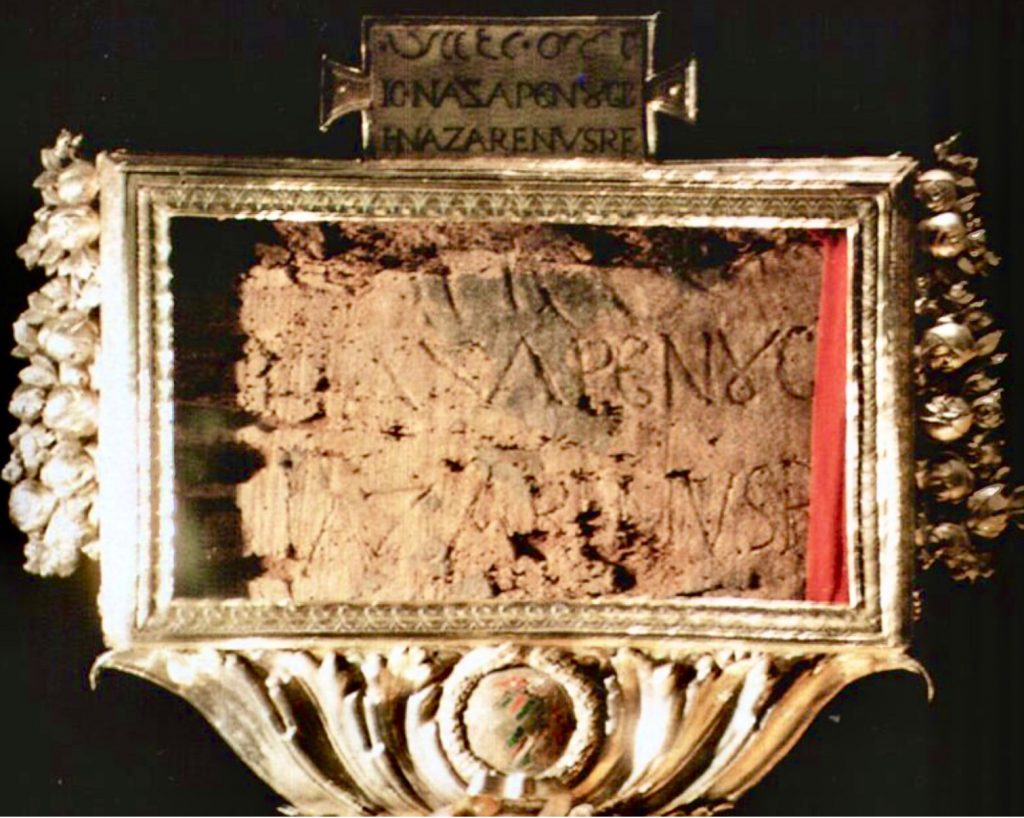 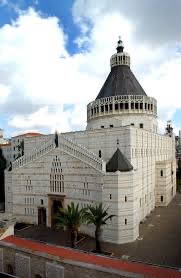 St Helena famously found the True Cross, but also the nails used in the crucifixion, the crown of thorns, and the wooden board (above left) that was put atop the cross which mockingly read in three languages, “Jesus of Nazareth King of the Jews”. At right is the Church of the Annunciation, which houses remains of previous churches built there over the centuries. Below: St Helena is also credited with establishing the first church at what became the Monastery of St Catherine, at Mount Sinai in Egypt, where the Burning Bush is also located. 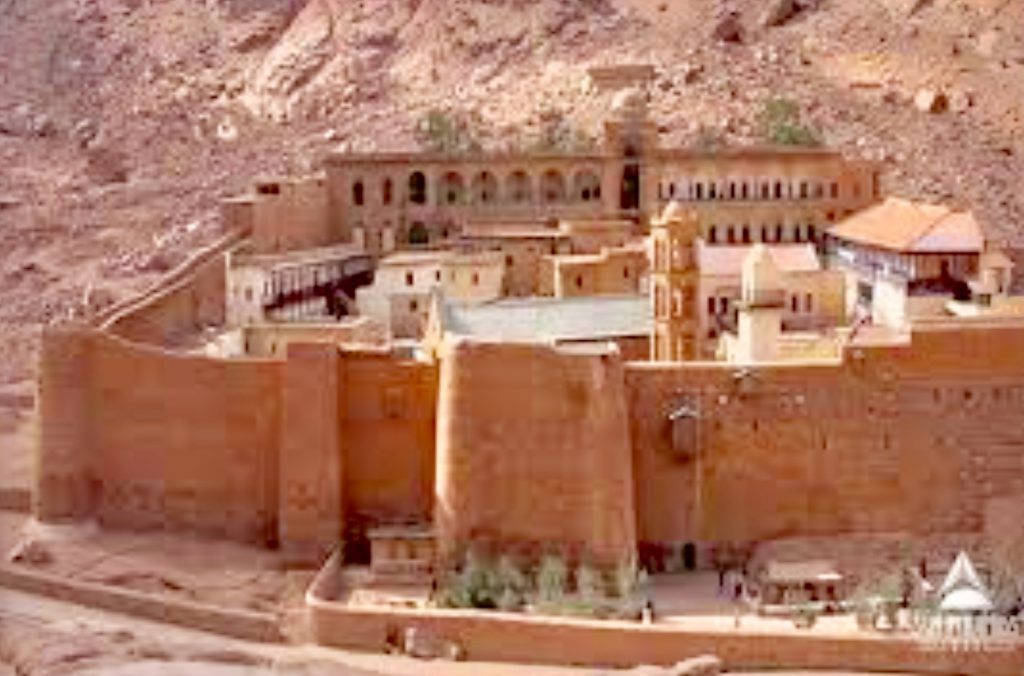